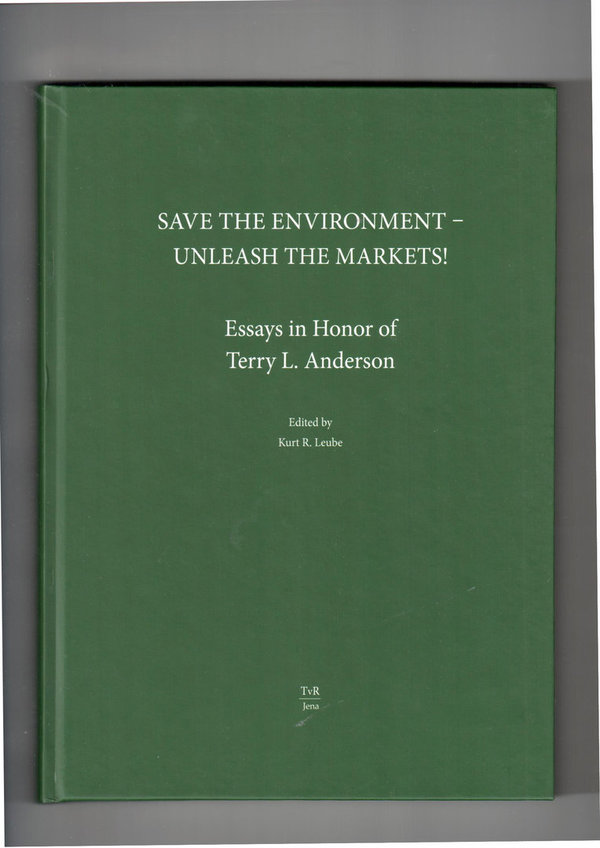 Kurt R. Leube (ed.): Save the Environment – Unleash the Markets

This celebratory volume comprises original academic essays commendable to honor Terry L. Anderson. The content of the book not only shows the profound international appreciation of Terry Anderson’s seminal academic work in free market environmentalism with his unwavering commitment to private property rights. It also intends to present him with a thoughtful ‘liber amicorum’. The title of the book reflects well Anderson’s personal credo: Save the Environment – Unleash the Markets! This collection of essays is a joint project of the Liechtenstein Academy, the European Climate and Energy Institute (EIKE) and the European Centre for Austrian Economics Foundation (ECAEF).

Terry L. Anderson received his PhD in economics from the University of Washington (US). In 1972 he began his successful teaching career at Montana State University, where he won several teaching awards . Anderson has been a senior fellow at Stanford University’s Hoover Institution since 1998 and currently serves as the John and Jean De Nault Senior Fellow. He is the past and founding president of PERC (Property and Environment Research Center), a pathbreaking think tank in Bozeman, Montana. Anderson is one of the architects of free market environmentalism , the idea of using markets and property rights to solve environmental problems . His extensive work prompted public debate over the proper role of governments in managing natural resources and the environment. Anderson’s research has also focused on Native American economies, their culture and legal systems. He is the author and/or editor of numerous academic essays and 39 books, among them several award winning publications. He has been a Fulbright Fellow, a visiting scholar at Oxford University (UK), Basel University CH), Clemson University and Cornell (US). Anderson continues to be one of the featured speakers at ​the ‘International Gottfried von Haberler Conferences in Liechtenstein and the ECAEF/CEPROM Conferences in Monaco.